The German word Freiraum, literally translated, means free room. Freiraum is more than just physical space though, it is also a mental state of creativity and freedom. In 1929 Virginia Woolf argued for the necessity of a „room of one’s own“ for women writers: Freiraum, both literal and figurative, to think and to create. Almost a century later, having a private room is still a privilege, not only but especially for women. A virus knowing no boundaries or borders emphasized this inequality, making obvious the fierce competition for whose space is whose.

Which public does this public space belong to, what are its rules, and how are they policed? Unspoken questions that are revitalizing gated communities and exclusionary zoning around the world. Who gets to claim and define public spaces? Whose rules determine how space is used and shared? How does identity shape our experience of space?

Billy-Ray Belcourt, Besufekad, Intan Paramaditha, Adania Shibli, four international authors, have taken part in the LCB’s digital residency programme in 2021 and have discussed and explored different notions of space in conversation and in writing.

The digital residency is curated by Priya Basil and funded by the Federal Foreign Office.

Also have a look at the digital residency’s anthology edited by Natasha A. Kelly Un_Masking Difference. Literary Voices from Behind the Mask in 2020.

I remember the patient bed, blue, being moved from Mama’s room to the family room, directly across from the television and backing up against the dusty glass cabinet filled with ceramics and old, shabby, pathetic dolls. Everything was crowded together: a scratched brown leather sofa, a guest table covered with medicine bottles, vitamins, balms and a water jar, and, at bedside, a folding chair usually occupied by the nurse. Not far from the foot of the bed stood a round marble dining table, stylish during the ‘80s, but now drab. Atop the table was a blender, sometimes unwashed for several hours, its cord attached to the wall.
After changing my mother’s incontinence diaper and feeding her, the nurse would sit in the folding chair, wipe away sweat, and then, fanning herself with a thin book in her left hand, scroll up and down her cell phone with her right thumb. On Sundays, her day off, I’d sit there. The bed made everything feel that much more cramped and hot, but Mama refused to be cared for in her room.
“I don’t want to be alone, Muti,” she said.
“You won’t be alone, Mama,” I countered.
My mother insisted, so she’d lie there staring at the ceiling and listening to the television. When the nurse prepared food, I’d sit beside my mother and work with a computer perched on my lap until my thighs grew hot. Mama would comment on the news on television, and then tell me to find a channel with a soap opera, but soon she’d ask for more news, soap, news, soap, then she’d curse—damn tacky soap operas—before finally telling me to turn the TV off. I felt relieved whenever she fell asleep. I’d look at her closed eyes and her dry lips, half-open, and return to my computer screen, for just a few moments, because ten minutes later she’d open her eyes again and ask me to read from the Koran. I’d choose a verse at random and her eyes would close. After fifteen minutes she’d tire of my voice and have me find a reading of the Ayat al-Kursi on Youtube. The volume would be too low so I’d need to turn it up, but before long Mama would ask me to turn it down, up, down, up, off.
“Everything is dead,” she’d say. “But I’m not dead yet.“

The editor, the authors

Priya Basil is a writer and activist. In her book Be My Guest she connects stories about her family’s Indian-Kenyan traditions, her British heritage and life in Germany to make a passionate plea for hospitality in Europe. Her essays have been widely published, including in Lettre International, Die Zeit and The Guardian. She is co-founder and board member of the NGO WIR MACHEN DAS. Priya is also on the advisory board of the European Centre for Constitutional and Human Rights. In 2017, she initiated and remains actively engaged with a campaign for a European Public Holiday across the continent. Her film-essay Locked In and Out, exploring questions around citizenship, coloniality and memory culture, premiered on 16th December 2020 at the digital opening of the Humboldt Forum and is now available to watch on YouTube. Her latest book In Us and Now, Becoming Feminist (Suhrkamp, 2021) once again powerfully blends the personal and political.

Billy-Ray Belcourt is a writer and academic from the Driftpile Cree Nation. He is an Assistant Professor of Indigenous Creative Writing at the University of British Columbia. His debut book of poems, This Wound is a World (Frontenac House, 2017), was awarded the 2018 Canadian Griffin Poetry Prize, the 2018 Robert Kroetsch City of Edmonton Book Prize, and a 2018 Indigenous Voices Award. In 2019, Belcourt released his second book, NDN Coping Mechanisms: Notes from the Field (House of Anansi), that won the 2020 Stephan G. Stephansson Award for Poetry. His most recent book, A History of My Brief Body (Hamish Hamilton, 2020), is a collection of essays on grief, colonial violence, joy, love and queerness.

Besufekad is an Ethiopian writer living in Addis Ababa. In the contribution for this anthology written on 21 November 2021 while the war in Ethiopia was nearing Addis Ababa, Besufekad struggles to make complete sense of what is happening but only finds and offers a few lines that might help to keep going. Besufekad decided to use a pseudonym in order to avoid the political polarization that exists between leaders and public figures representing different groups of Ethiopians.

Intan Paramaditha is a writer and academic. She is the author of the short story collection Apple and Knife (Brow Books, 2018). Her novel The Wandering (Harvill Secker, 2020), translated from the Indonesian language by Stephen J. Epstein, was nominated for the Stella Prize in Australia and awarded the Tempo Best Literary Fiction in Indonesia, the English PEN Translates Award, and the PEN/Heim Translation Fund Grant. Her essay On the Complicated Questions Around Writing About Travel was selected for “The Best American Travel Writing 2021”. She holds a PhD from New York University and teaches media and film studies at Macquarie University, Sydney.

Adania Shibli, born in Palestine in 1974, has written novels, plays, short stories and narrative essays. She has twice been awarded with the Qattan Young Writer’s Award-Palestine in 2001 for her novel Masaas (Eng. Touch, Clockroot, 2010), and in 2003 for her novel Kulluna Ba’id bethat al Miqdar aan el-Hub (Eng. We Are All Equally Far From Love, Clockroot, 2012). Her latest novel, Tafsil Thanawi (Eng. Minor Detail, Fitzcarraldo Edition, 2020), was shortlisted for the National Book Award in 2020 and nominated for the International Booker Prize in 2021. Since 2012 Shibli has been teaching periodically at Birzeit University, Palestine. In the fall of 2021, she was invited to the University of Bern, Switzerland, as a Friedrich Dürrenmatt Guest Professor for World Literature. 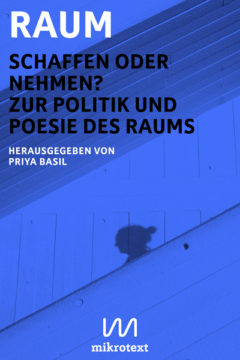 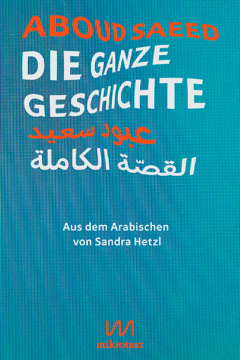